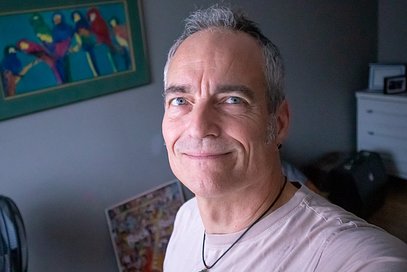 A Quick Look At Reinier's Story (So Far)

I'm Reinier, a 60 year old fellow who’s had, some would say, a colourful life. It MOSTLY hasn’t been boring for me. And it certainly, at times, has been very challenging.

My talents for music and visual arts (photography and video both) have paid my rent for the last 30 plus years. As well I've trained as a Life Counsellor - therapy, on both sides of the fence, being a big part of my "survival strategy" over the last 30 years as well. All these things are in the Creative realm. The realm of the heart, the landscape of the soul.

The first 40 years of my life I just attempted to "fit in" and figure out what I wanted to do when I grew up.   This involved lots of medical and mental challenges for me. Around my 41st year on this planet I gave up on that plan.

The next decade or so was just about "doing my best". Doing my best to pay my way and tolerate an increasingly confusing world.

And in my early 50’s I was granted the understanding of something that helped me understand why I would never be "normal".

What happened? After editing a number of FASD videos produced for Dr. James Reynolds at Queen’s University in Kingston Ontario, I started seeing myself in the behaviours of the people on the FASD spectrum that Dr. Reynolds and his team were having interviewed.

The people I was working with at Queens noticed something too. After hearing more of my own personal story I was encouraged to dig deeper and find out the truth that was tickling my heart and soul at that time.

At 56 years old, and after a 3-year long and winding road with many stops along the way, I finally received a diagnosis of adult FASD. I was just 56 years old at this time.

Surprisingly enough, I didn’t take this as "bad news".  To me, it was actually good news.

I finally saw a rather simple explanation why decades of therapy and self-awareness practices had only gotten me so far. Why years and years of "trying" to fit in just wouldn't couldn't work the way I had hoped it would.

Today? Well, at times, it is true, Life can still seem pretty challenging to me.  My disorder doesn’t take a day off.

Meds nor alcohol mitigate its very present daily affect on my life. Don't get me wrong - I've tried both to varying degrees towards finding some solace inside my own body and head. But they caused more problems than what they solved. I treat them both with respect now and some distance.

Having the FASD diagnosis took away some of the surprises that are built into my nervous system and helped me let go of non-effective diagnosis and strategies. I'm now aligned to how I was created and for the last few years I've been integrating this into a more authentic life. And I remind myself to celebrate often how well I've kept my head above the waterline.

Now, with a more accurate understanding of how my brain works, I'm "fine tuning" my life and my behaviours to bring me, and those around me, a smoother and more loving life.

Today, people live mostly in their heads.  And a lot of folks get in trouble trying to live from just below their waistline.

Both sources of wisdom seem to be failing us these days.

Take a look at this video and hear Reinier talk about the OTHER source of wisdom we all carry with us.

Hint: it's BELOW the neck and ABOVE the waist.
Take a peek !